g.     Acknowledgement of Colleagues who are retiring

A lunch meeting for members of NAPD Region 6 took place in the picturesque and charming village of Adare, at the Dunraven Arms Hotel, on Thursday, 14th June 2016.  The attendance was excellent with almost thirty (30) NAPD Members coming together to discuss challenges and issues, but also meeting to bid farewell to valued and highly regarded colleagues who are retiring this year.  Chairperson, Donncha O'Treasaigh welcomed everyone to the meeting and thanked Members for their support throughout the year.  Donncha referred to the difficult year school leaders had to endure with ever-increasing work-load commitments and endless uncertainty regarding Junior Cycle reform, Croke Park Hours and Garda Vetting changes.

Donncha recommended that Members confirm that they have booked their places for NAPD Conference 2016 as there is significantly more interest in the event given the numbers of new Members who have been appointed to school leadership roles in recent years.  He also encouraged Members to make an effort to ensure that both the principal and deputy principal can attend the conference.  He stated that schools where this occurs get the maximum benefit from the inspirational talks and ideas which NAPD Conferences are renowned for.

Region 6 was delighted to welcome NAPD President, Mr. Paul Byrne to the meeting.  Paul spoke at length to the group and appealed to colleagues to ensure that we all put our own well-being and health first, as he is hearing accounts from all over the country that principals and deputy principals are experiencing considerable burn-out and stress related illness.
Paul praised Region 6 for its active and vibrant level of activity to support people in this busy role.  He reminded Members of the importance of NAPD Conference and all of the impressive supports that are available through NAPD.

The group received a very comprehensive and relevant report from NAPD executive member, Mary Jones relating to the topics and issues which are currently presenting challenges to school leadership and the operation of schools.

The contribution and commitment of three longstanding NAPD members, who have chosen to retire, were acknowledged at the meeting.
Mr. Tom Prendergast, Principal of Sexton Street CBS, Limerick spoke warmly and in great admiration of Ms. Elizabeth Quinn, former Deputy Principal of Sexton Street CBS, Limerick.  Tom gave a very impressive account of Elizabeth’s professionalism, dedication and hard-work as a teacher in the school, where she taught French, and later-on, as an highly effective deputy principal.  Elizabeth thanked Tom and all of NAPD Region 6 for their support down through the years.  She praised the Association for its outstanding work in supporting colleagues.

Mr. Padraig Flanagan, Principal of Castletroy College paid a touching tribute to both of the deputy principals of Castletroy College who are retiring, Ms. Esther Griffin and Ms. Joan McGarry Moore.  Padraig explained how both deputy principals’ friendship and highly commendable service to their school supported his work as he assumed the position of principal five years ago.  Padraig expressed his admiration and fondness for both Esther and Joan and thanked them, in a very emotional and poignant way, for their enthusiasm and commitment to the Castletroy College community.
Both Esther and Joan spoke about their love of the roles they fulfilled and the enjoyment they got from working in school-life.  In particular, they expressed tremendous praise and compliments to NAPD and the exceptional support and collegiality both experienced while working in school management.
Donncha O'Treasaigh articulated his sincere gratitude to both Esther and Joan for the exemplary work they did as officers of NAPD Region 6 throughout his time as Chairperson.  Donncha described how Esther had been a wonderful Treasurer in Region 6 and that she played a pivotal role in the planning of several Meitheal events for the enjoyment and benefit of colleagues.  He stated that their work in Region 6 was without doubt – highly distinguished.
Donncha thanked Joan for her work as Secretary of Region 6 for a number of years and informed everyone present, that the accounts of Region 6 events were always of the highest and most efficient of standards.
Donncha expressed the thanks of NAPD Director, Mr. Clive Byrne to both Esther and Joan for their work in the Region.

NAPD President, Mr. Paul Byrne made presentations to each of the retirees at the end of the meeting.

Donncha O'Treasaigh informed Members that the date for the Annual General Meeting would be – Wednesday, 21st September 2016, in the Woodlands House Hotel (Lunch at 12.45pm).

Donncha Ó Treasaigh thanked all of the officers of the sub-committee for their tremendous support and efforts in planning an excellent year of activities, at regional level. In particular, he praised Ms. Elizabeth Cregan, Treasurer, for all of the exemplary work she carried out in preparation of the events that took place during the year. 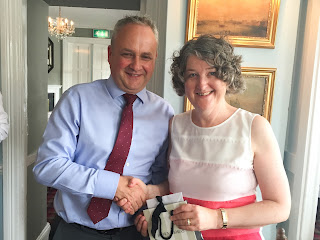 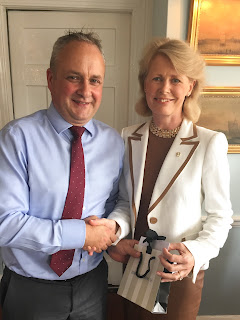 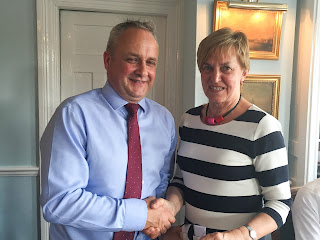 Get Email Notifications - Submit your Email